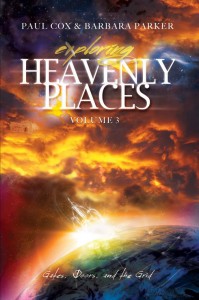 Addressing the religious leaders of His day, Jesus said, “For you shut up the kingdom of heaven against men; for you neither go in yourselves, nor do you allow those who are entering to go in.” He also taught us to petition our Father, “….Your kingdom come. Your will be done on earth as it is in heaven…For Yours is the kingdom and the power and the glory forever.”
Unwilling to follow the poor example of those scribes and Pharisees, we choose to explore heavenly places through the leadership of the Holy Spirit; taking back what has been given away to the enemy and securing victory in the heavens.
This third book in the Exploring Heavenly Places series examines the nature of these realms as a dimensional system, focusing mostly on the grid, doors and gates.  The evidence presented is clear that when His will is done there, our physical existence here is the beneficiary of positive change.

Open and Closed Gates and Doors

As the new revelation regarding gates and doors began, Paul and his intercessors started discerning them around the people for whom they were praying during ministry sessions. One young man was seeing gates on every cell, even though he was unaware of the biological truth of his vision.

Following the admonition of Hebrews 5:14 to train our senses, Paul began practicing whenever gates manifested in a prayer session, not really knowing what he was doing at the time, but following the Lord’s direction by faith. It wasn’t long before he was in a meeting in Ontario, Canada with a friend who was suffering terribly with Crohn’s disease. At the time, we were doing mostly generational prayer and many of us had prayed everything we knew to pray, but nothing seemed to work. In fact, our friend was becoming steadily worse. But on that day, the power of God suddenly manifested in the room and all of us were literally on the ground, unable to stand before Him. Paul leaned over toward our friend and prayed, “Lord, close these doors,” and he was immediately healed. The prayer was very simple and went something like this, “Lord, please open all doors that should be open, and close all doors that should be closed.” Everyone was amazed and excited at the miraculous healing, and Paul was thinking, “Maybe we’re onto something here.”

Soon thereafter, Paul began feeling the grid on his body. He said, “It felt very strange—like a zzzzzzz on my body. I felt bad, so I asked the Lord to clean off these lines, not knowing at the time what I was doing. But there was a spot on my skin that I felt was bad, so I asked Him to clean off the doors. The spot is now gone. I also had a problem with a knuckle that was arthritic, so I prayed the same prayer and my knuckle was healed and there is no more pain.”

We believe that a gate is an entrance to a dimension, and within a dimension are many doors. If you picture a hotel corridor there are doors on either side, which is often the way that Paul feels them. Some of our spiritual doors are open but they’re not supposed to be, allowing access to the enemy. But at the same time, some doors are closed that should not be closed because they are the access points to blessings.

Certainly we all want the Lord to enter our gates:

Lift up your heads, O you gates! And be lifted up, you everlasting doors! And the King of glory shall come in. (1)

However, it took us a long time to figure some things out, partly because we didn’t notice there are differing translations in popular versions of the Bible of the original language for doors and gates. Two very significant scriptures where gates are mentioned appear below in two translations, the NKJV and the ESV. In this case, the correct translation of doors and gates from the original language is found in the ESV. Finally, everything started falling into place and we were able to pair together all that we were discerning with scripture once we realized that the key is the doors, and the doors must be opened in order for the gates to remain open. Compare and contrast the NKJV versus the ESV in the following verses. The significant words are in bold for clarity:

(ESV) Thus says the Lord to his anointed, to Cyrus, whose right hand I have grasped, to subdue nations before him and to loose the belts of kings, to open doors before him that gates may not be closed: “I will go before you and level the exalted places, I will break in pieces the doors of bronze and cut through the bars of iron” (4)…For he shatters the doors of bronze and cuts in two the bars of iron.(5)

Once again, the correct translation of doors and gates from the original language is doors of bronze—not gates of bronze. Now, we often ask the Lord to open and close doors when praying for someone. We also may add a request that He break in pieces all doors of bronze, destroy all bars of iron, and occupy the gates. Sometimes the results are measurable—even dramatic. Other times we observe no changes. Why? We don’t know, so we persevere in faith.

As I (Barbara) have prayed with people in this manner, some have reported that they can see doors opening and closing in the spiritual realm—sometimes hundreds of them—and they also see gates being opened wide. In one instance, I asked the Lord to show a lady what He had done and she was astounded by a vision of herself standing on dry ground at the bottom of a dam, similar in size to Hoover Dam. As the floodgates opened, she was engulfed in a rush of water with a current so strong it should have swept her away, but she was able to stand strong in the midst of it. She immediately understood this to be an indication of the powerful cleansing by the Spirit that she had just received.