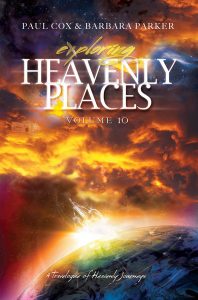 This travelogue illuminates some of the places and experiences encountered by the authors and others associated with the ministry of Aslan’s Place.
It is our hope that this volume will act as an appetizer to what is possible as God takes you on your own journeys!

A Travelogue of Heavenly Journeys

When I[1] was a child, Grandma and Bill (my mom’s stepdad since her own childhood) would usually come to visit once or twice a year. Often, they would bring their projector and slides of their most recent travels, and we’d spend an evening watching while listening to stories about their adventures. I specifically remember the cool beauty of Banff and Lake Louise in Alberta, Canada; and in contrast, there were the hot desert scenes of Mexico, complete with bright, colorful clothing and pet iguanas. Grandma’s slide shows became my first introduction to personal travelogues.

A travelogue is a movie, book, or illustrated lecture about the places visited and experiences encountered by a traveler;[2] thus the sub-title of this book, A Travelogue of Heavenly. As we pondered the next book for the Exploring Heavenly Places series, this seemed to be a natural companion to Volume 9: Travel Guide to the Width, Length, Depth and Height.

The destinations illustrated here do not represent an exhaustive account of each one; nor do they deal with everywhere the Lord has taken us, for there remains a multitude of yet-to-be-revealed heavenly realms and kingdoms and assorted dimensional spaces. To put it in perspective, consider the fact that one lifetime is insufficient for even the most seasoned international traveler to explore every city in every country of the world, let alone all of their attractions and outlying areas. Then, magnify the farthest reaches from those earthly locales by millions, or even billions, and a tiny glimmer of the immensity of God’s spiritual creation may be seen. The vast majority of our excursions into undiscovered territories will occur throughout eternity, so this travelogue is simply an appetizer, meant to make the reader hungry for more. Scripture illustrates the beauty, majesty and astounding creativity of God on earth and in the heavens:

Worthy are you, our Lord and God, to receive glory and honor and power, for you created all things, and by your will they existed and were created.[3]

For thus says the Lord, who created the heavens (he is God!), who formed the earth and made it (he established it; he did not create it empty, he formed it to be inhabited!): “I am the Lord, and there is no other.[4]

Back to my grandmother’s slide shows; those pale, grainy images that were projected on our living room wall suffer greatly in comparison to the digital images of today; pictures so clear, crisp and sharp that one can almost feel like they are there. Put those images into a 3-D movie or a holographic representation and the experience becomes even greater. Our travelogue is kind of like those old slide shows; we only see bits and pieces now, and even then they are not complete pictures of all that God will show us one day. Even so, we hope this limited view will encourage our readers to regularly go exploring in God’s heavenly places, just as Grandma’s travelogue increased my desire to visit the places she’d been. Remember:

For we know in part and we prophesy in part, but when the perfect comes, the partial will pass away.  When I was a child, I spoke like a child, I thought like a child, I reasoned like a child. When I became a man, I gave up childish ways. For now we see in a mirror dimly, but then face to face. Now I know in part; then I shall know fully, even as I have been fully known.[6]

[1] Throughout, first-person references (I, me, my) refer to Barbara; all of Paul’s words are clearly indicated by name.